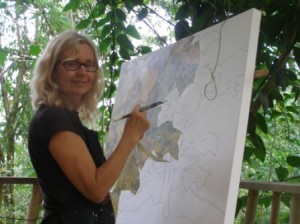 Linda Moskalyk grew up near Saskatoon, Saskatchewan Canada.  Her earliest memory of learning the skills of art started as lessons in the basement of a neighbour’s house and she has been painting ever since.

By 1995 Linda became serious about creating and teaching art.  For the most part she is a self taught artist who has taken the time to explore and experiment with various methods while also quietly observing techniques of the old masters, the impressionists, and artists of the present day. Along with these observations and attending a variety of workshops a transition in her creative style took place. Her work morphed from one form to another until she has comfortably settled into confident creations of mixed media using collage, acrylic, and found objects from nature.

Her love of nature and her occupation as an arborist has provided her with the familiarity and motivation to paint the natural environment.  Her work has been featured in the SGI calendar, “Canadian Trees” magazine, and “La Nacion” the national newspaper of Cost Rica.  Linda’s works have been exhibited in numerous shows and galleries in Saskatoon, Edmonton, and San Jose, Costa Rica.

The expressions of painted trees and other forms of nature are meant to create awareness of the environment for the protection of our forests and natural areas. Her work encourages a kind of observation that starts conversations and stimulates the viewers to further explore the significance of her subjects.

Linda’s curiosity of the world and interest in travel resulted in the opportunity to spend some time painting at the Julia and David White Artist Colony in Costa Rica in 2009. One thing led to another and she now has her own studio in the tropical rain forests and divides her life and creative time between Canada and Costa Rica.